Strait away you notice on the home screen of CVG at the top there is an advert for the new upcoming Tomb Raider game, which when clicked on sends you strait to the Game website so you can pre-order it. As you scroll down the home page the same game is advertised twice more, along with other game and peripheral adverts. The title font is designed to be gamer related and the red, white and black colour layout, in my opinion it is obvious that this arm of Future plc.’s video game magazine portfolio is aimed at males aged from mid-teens to early twenties.

Towards the top of the home screen there is a menu with buttons for specific game console platforms such as: Xbox, PlayStation, Nintendo and PC as you hover your mouse pointer over these buttons there is a drop down menu with further relevant categories, these include platform specific magazines such as, PC Games, and PSM3 which are also Future plc. magazines.

There is lots of information about new and upcoming games, the latest offers and price cuts on games and games consoles as well as readers opinions on issues and polls regarding the world of gaming.

Edge online looks more professional and is aimed at a more mature male audience, the title font is designed to give a more corporate guise. As with CVG at the top of the home page there is an advertisement but this is not advertising a new game or a pair of headphones, it is for the charity Shelter asking for donations. There is still the news and reviews of new games and consoles but the emphasis is driven much more toward the games industry, as one of the main articles featured on the home page features ‘The Edge Developer Awards’  which highlight the best game development studios in the world.

There is also a section that shows game industry related jobs, which also indicates that their target audience is somewhat older than CVG.

As Edge magazine is steered towards the state of and developments within the games industry, there is much more emphasis upon hardware and software production companies and manufacturers. 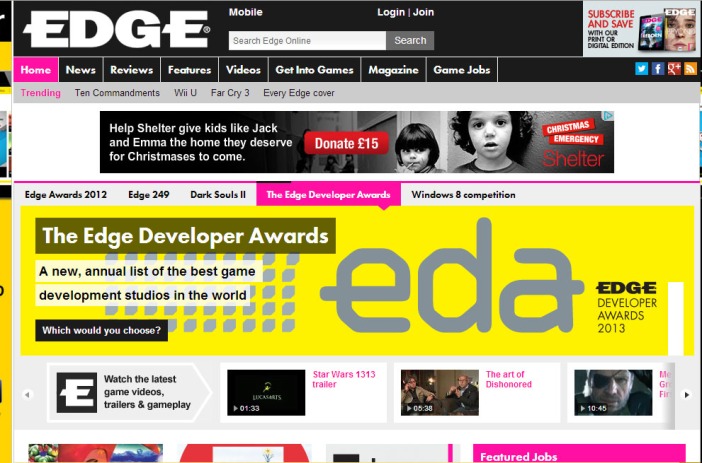